For the past 38 years Poppy  has  been in working as a  gardener – meaning a  garden  designer, garden  installer and plantaswoman -while much of  that time also running   and  training   a  team of  English and antipodean landscapers.

Today things  are  stripped    down to  a  far less  pressured regime  where Poppy just continues with  a  couple of  her  fonder  gardens for  love rather  than money.

Green -fngered  all he  life, Poppy  only became a professional  at age 30  by  badgering the  head  gardener at  Regents Park .  She  started  with  the lowliest  jobs but avidly  absorbed  all  the  facets  of this ancient and  venerable  craft .   The  Royal  Parks send her to Eltam Palace to complete  her  NvQ which she  passed with   distinction.

After leaving, he  first job  was to work  for  the RHS dictionary on the genus Amaryllidaceae.   Soon   after she  launched  a commercial company in 1997 and proceeded  to create  and  restore hundreds of gardens  – mainly in  London.

“In whatever I do I like to combine intuition, aesthetics and practical skills.”

Gerry Feeny is the  director of Green Spirit gardens.  His  speciaslity  is  in  structures and   is an irrigation specialist. 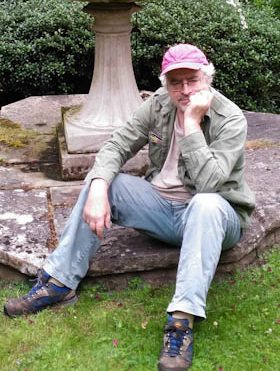 some badges of honour